The exact role of the baby’s gut bacteria is unclear and it isn’t known if these differences at birth will have any effect on later health. The researchers found the differences in gut bacteria between vaginally born and caesarean delivered babies largely evened out by 1 year old, but large follow-up studies are needed to determine if the early differences influence health outcomes. Experts from the Royal College of Obstetricians and Gynaecologists say that these findings should not deter women from having a caesarean birth.

Published in Nature today (18th Sept), this largest ever study of neonatal microbiomes also revealed that the microbiome of vaginally delivered newborns did not come from the mother’s vaginal bacteria, but from the mother’s gut. This calls into question the controversial practice of swabbing babies born via caesarean with mother’s vaginal bacteria. Understanding how the birth process impacts on the baby’s microbiome will enable future research into bacterial therapies.

The gut microbiome is a complex ecosystem of millions of microbes, and is thought to be important for the development of the immune system. Lack of exposure to the right microbes in early childhood has been implicated in autoimmune diseases such as asthma, allergies and diabetes. However, it is not fully understood how important the initial gut microbiome is to the baby’s immune system development and health, how a baby’s microbiome develops, or what happens to it with different modes of birth.

To understand more about the development of the microbiome, and if the delivery method affected this, researchers studied 1,679 samples of gut bacteria from nearly 600 healthy babies and 175 mothers. Faecal samples were taken from babies aged four, seven or 21 days old, who had been born in UK hospitals by vaginal delivery or caesarean. Some babies were also followed up later, up to one year of age. 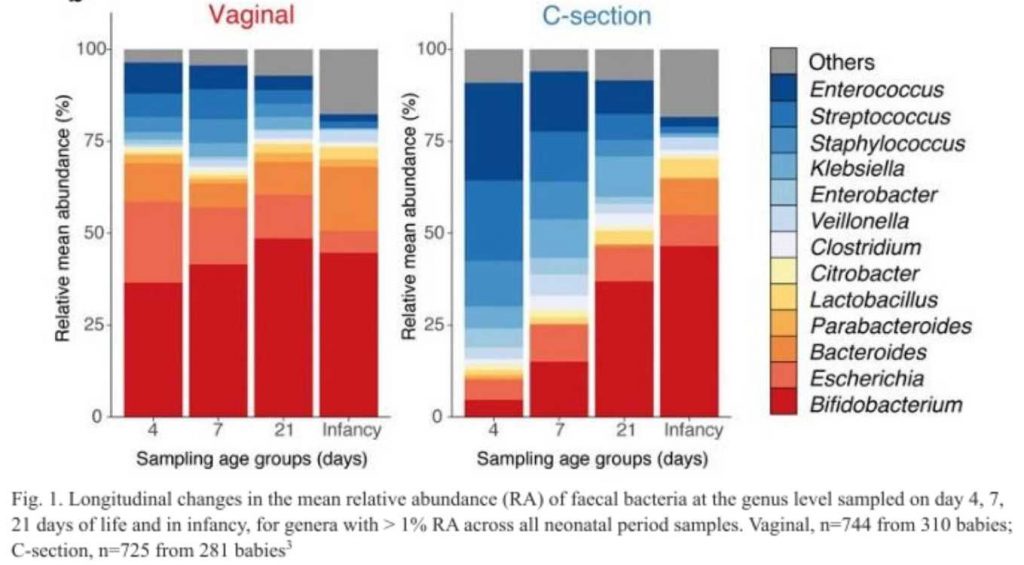 Using DNA sequencing and genomics analysis, the researchers could see which bacteria were present and found there was a significant difference between the two delivery methods. Researchers concluded that babies born by C-section had a reduced number of “good” Bacteroides derived from their mothers and an increased number of opportunistic pathogens, including Enterococcus, Enterobacter and Klebsiella species2(Fig. 1). 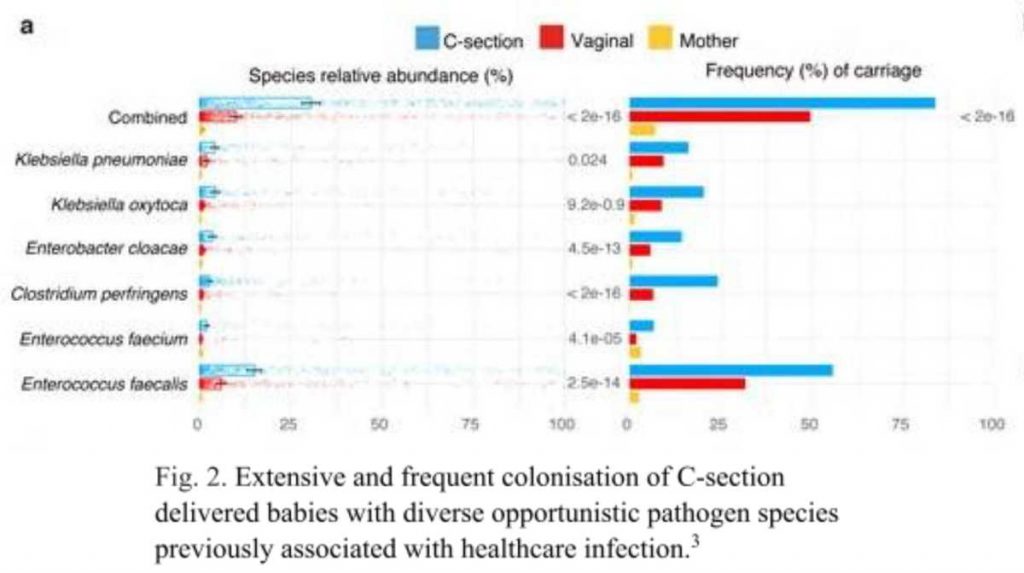 While C-section babies were deprived of maternally transmitted commensal bacteria, they had a substantially higher relative abundance of opportunistic pathogens commonly associated with the healthcare environment. These enriched species included E. faecalis, E. faecium, E. cloacae, K. pneumoniae, K. oxytoca andC. perfringens (Fig. 2), some of which are members of the ESKAPE pathogens responsible for the majority of nosocomial infections4. Among C-section born babies, 83.7% carried opportunistic pathogen species during the neonatal period , in comparison to 49.4% of the vaginally born babies (Fig. 2).

Senior author Dr. Nigel Field (UCL Institute for Global Health) said: “Our study showed that as the babies grow and take in bacteria when they feed and from everything around them, their gut microbiomes become more similar to each other. After they have been weaned, the microbiome differences between babies born via cesarean and delivered vaginally have mainly evened out. We don’t yet know whether the initial differences we found will have any health implications.”

Dr Alison Wright, Consultant Obstetrician and Vice President of The Royal College of Obstetricians and Gynaecologists said: “In many cases, a Caesarean is a life-saving procedure, and can be the right choice for a woman and her baby. The exact role of the microbiome in the newborn and what factors can change it are still uncertain, so we don’t think this study should deter women from having a caesarean. This study shows that more research is required to improve our understanding of this important area.”

All women who have a caesarean are now offered antibiotics before the delivery to help prevent the mother developing postoperative infections, meaning that the baby also receives a dose of antibiotics via the placenta. This could also cause some of the microbiome differences seen between the two birth methods.